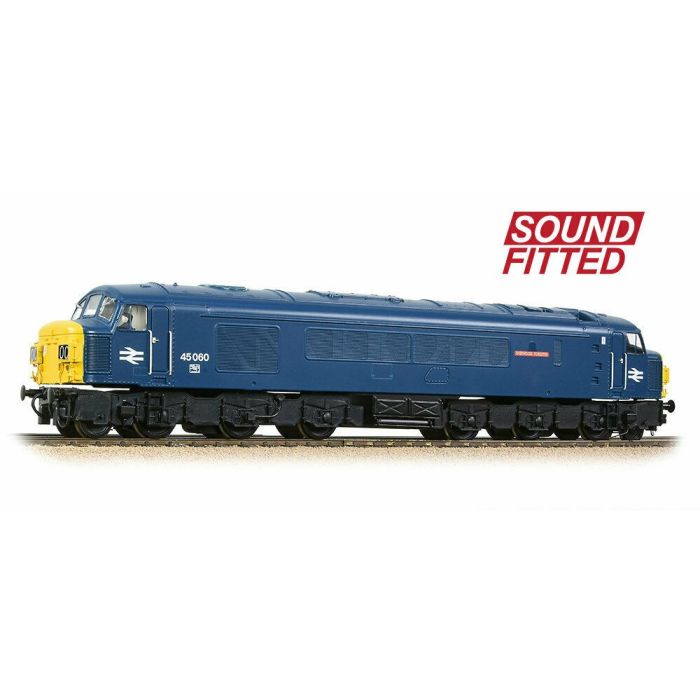 Analogue Users: Directional lights and basic Prime Mover (engine) sounds, which vary with speed, plus any other automated sounds, can be enjoyed when using this model on analogue control (DC) straight from the box!

The 127 British Rail Class 45s, also known as the BR-Sulzer Type 4 diesel locomotives, were built by British Railways' Derby and Crewe Works between 1960 and 1962. Along with the similar Class 44 and Class 46 locomotives, they became known as Peaks.  The Class 45s began their lives with a variety of nose ends, incorporating gangway end doors flanked by split headcode boxes (Nos. D11-D15), split headcode boxes but no gangway doors (a group each of Crewe and Derby examples) and twin headcode panels situated in the centre of the nose (the latter built Derby and Crewe specimens). Numerous locos transitioned through a single central headcode panel phase (akin to the Class 46s), before the majority received plated over nose ends with sealed beam headlights in the 1970s. ETH-fitted survivors of Class 45/1 received high intensity headlights in the mid-1980s. Liveries worn were standard BR lined green, 'austerity' green without the cream embellishments of the original livery, and BR blue, a few with small yellow panels, and ultimately the entire class with full yellow ends.

Class 45s became the main traction on the Midland Main Line from 1962, and their introduction allowed considerable acceleration of the previously steam-powered services. The Class 45s remained the main source of power on the Midland Main Line up to 1982, when they were relegated to secondary services following introduction of HSTs on the route. From 1986, Class 45s virtually disappeared from the line. From the early 1980s until their final withdrawal in 1988, the Class were regular performers on the North Trans-Pennine line, working services from Liverpool Lime Street to York, Scarborough or Newcastle via Manchester Victoria, Huddersfield and Leeds. These trains were usually formed of early-type BR Mk2 carriages, of up to seven in a typical train.

The Class 45s also worked several named expresses including the Thames-Clyde and Thames-Forth, also known as The Waverley, on the much-lamented route from Carlisle to Edinburgh via Hawick.  Class 45 No. 60 'Lytham St Annes', later No. 45022, is famous for working the final service train over the Waverley route before it closed on 6th January 1969, this being the final Edinburgh to St Pancras sleeping car service.